Zagreb hosted GOAP. Exactly 20 best start-ups pitched at the conference, but some think that event was on a "too-high level". They are wrong!

For the past two days, Croatia has been a special place. Some might go as far as saying that something historical has happened. That might be true, and the future will either confirm or deny that, but there are some facts…

The Geeks on a Plane crew landed in Zagreb; we met them, some of us got the chance to pitch to them, we partied with them. Some even got the invitation to 500 Startups (congrats WhoAPI crew, you rock!). But what all of us got was this attention, this moment where you could start seeing that, in fact, you can build businesses and change the world even from this part of world and be honestly inspired.

And no – no matter how hard some of you try to say that Dave or other dudes from GOAP are not such a big deal and that there is no point in the President of the Republic having them as his guests – the facts are different.

So what’s the fuss about the President greeting these guys? The fact that most of them are investing “only” 25 – 50k USD in the seed round? Or the fact that you are not the ones receiving that? Or just pure jealousy? Honestly – I don’t even care. And it doesn’t even matter. But the amount of money in the round is not the most important thing. Comparing 25k from those guys and 25k that some local guy can invest in redecorating his pub is mixing apples with oranges. But, yeah – for some cheap publicity that should work fine. Thinking twice about it… well, that might change the perspective.

I’d hope that President Josipovic and other dignitaries would greet each and every investor and change the stereotypical view that investors are mean, greedy and here to take your money away and generally not welcomed. In fact, they are guys and girls who, actually, can help change things. Not just through financial investments, but through building long-lasting, strong connections – and, in my opinion, by inspiring.

I was there these days. Together with Božidar from Backway, Matija from Farmeron, Marko from Salespod, Dalibor from ONCE, Edi from WhoAPI and others. And we know what happened yesterday. For a brief moment we knew and we got the additional inspiration and encouragement that we can make the change and that we can, in fact, change the world. Sounds like a cliché? It might be. But I don’t even care. Nor should you.

You should care more about the fact that Dave McClure and the rest of the gang have come here, have been honestly impressed by the potential here and have helped this new wave of companies from Croatia and the region to find their place in the sun.

It’s not about looking at Dave or anyone else as “Geek Gods” as one journalist tried to get me to comment on it – it’s about building bridges between Croatia and the region and the Valley or the USA in general. Before Skype, who’d dared to invest in Estonian IT? Hell, who even knew where Estonia was? Today, it’s completely normal. With successes like Zemanta, Toshl, Farmeron, WhoAPI, Nordeus, Wall of Tweets and others, we can hope and expect that investors will have this same feeling of safety in South East Europe. Indeed, that in Croatia (the birth place of the greatest geek of all times, Nikola Tesla) investment and finding great teams are not impossible.

So next time before you try to be “cool” or “provocative” by denying the facts and pushing your own agenda, try to think about the hundreds of us who got inspired, funded, connected or just had a great time with our guests from the USA and from all over the world. Think about what some of us will bring to this world and how we will change some things. And then ask me “What’s the big fuss about it?” It is big fuss because it IS a big thing.

Or as my friend Matija from Farmeron said yesterday: “I’m not sure everybody understands what actually happened in Zagreb yesterday…” 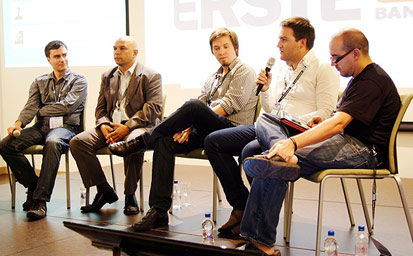