Geeks on a Plane (GOAP) are in Zagreb

GOAP Zagreb was held on September 26 and it offered the chance for 20 of the best startups from Croatia and the region to present ideas.

Geeks on a Plane aka GOAP Zagreb was held on September 26 and it offered the chance for 20 of the best and brightest startups from Croatia and the region to present their ideas in front of world-renowned investors from the US and other countries.

Probably the most prominent was Dave McClure, who has already invested in Croatian startup Farmeron. The conference was a mix of dignitaries speaking at the beginning and talking about the soon-to-be-built “Nikola Tesla” incubator, which will be the region’s largest, followed by McClure’s keynote presentation “Metrics for Pirates”.

Then 20 startups pitched their ideas, including UX Passion’s own Sidekickr TV – a pitch that was considered the best one by the Twitter crowd. You can read more about all the different projects at Netocratic’s website.

Panel discussions dealing with the idea of startups, getting started and related topics were discussed and followed by the so-called “Term Sheet Battle”.

The winners of the startup competition were the WhoAPI team who were invited to McClure’s 500 Startups incubator.

The day after, Ivo Josipovic, President of the Republic of Croatia, hosted a meeting with the “geeks”.

Extra: Vibor from our team writes about his views on GOAP and why he thinks it was a big deal for the startup scene. 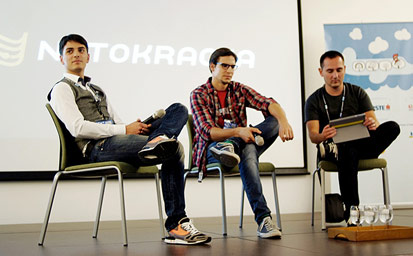