Thinking about the design process: simple or complex?

In its most generic form, process refers to a plan for the construction of an object or a system. As such, it often requires a disciplined set of steps.

In its most generic form, design refers to a plan for the construction of an object or a system. As such, it often requires a disciplined set of steps, often called the design process. Its initial idea and purpose is to provide a well-established framework, foundations for design-related work. But often the design process can be too complex and harmful. Design process, yes, but…

I remember the stories about design processes at one of my former companies where the management was really into the design process “because it will make us look serious in the eyes of competitors, clients and users”. And there was a bunch of steps in the process, there was a nice acronym to make the process seem more “cool” and appealing, but was there really a need?

In reality, many projects never actually followed the process. And that’s OK since, really, there was no reason to use 7 or more steps in a design process for a one-man project. Still, management insisted on using that process all the time.

However, this was not just a isolated incident. Talking to other designers and colleagues, they are facing the same issues and challenges. The vast majority does see value in having an established process – and how could they not? There are many reasons for that; however, too often processes are made complex on purpose to make them appear more “professional”.

How many steps are enough?

Just Google around.  An article on Inspirationfeed suggests 7 design process steps designers should follow, About.com’s Graphic Design Process is close as well, at Academia a similar approach can be found. Here’s an example from the University of California at Berkley and their 10 steps in the design process. My former company, FatDUX uses 7 steps even stating that it is important to understand that the process, as such, is linear and that any attempt to short-circuit individual steps will invariably lead to problems later on.

So, by looking at all these resources, it seems that there are no simple 3 to 5 step processes that are easy to explain – both to clients and users? Well, there are some exceptions and my favorite one is one from the guys at frog design – we’ve all heard about them – and yet, their design process has only three steps: discover, design and deliver they say. Of course, DDD is a nice acronym – you cut the number of steps, but you have to keep some of the coolness, right :)

Joking aside, I know that in real-life projects we are dealing with very complex steps and approaches and that this can lead to the idea that we should have complex design processes put in place to be sure that absolutely everything is being covered. I disagree. I believe that the design process should be fairly loose and very flexible to allow numerous modifications and changes as the project is developing. And that also means that having fewer steps is just fine. However, I also believe that it should contain one characteristic – to start with a broad spectrum of possibilities, ideas and approaches and to end with something more focused, some concrete deliverable of any form.

Back to frog again – I’m sure that they don’t really have just three steps in their process, but those three are so freely defined and broad that they to allow modifications and cover most, if not all, scenarios.

By being general, sometimes you are able to take care of the specifics in a much better way than being obsessed by having too many steps to cover all phases and all possible outcomes.

It makes no sense, and apart from that, it’s not really applicable in real life.

If, on the other hand, you are looking to put bunch of steps in your design process in order to make yourself look smart in front of your colleagues, competitors and users – I’d suggest you think twice. 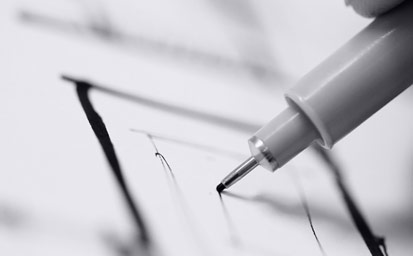