UX Passion at Webfest .ME and Webup

WebFest.ME is the largest Internet festival in southeast Europe dedicated to the promotion and advancement of the Internet and society.

Web Fest .ME is the largest Internet festival in southeast Europe dedicated to the promotion and advancement of the Internet and society in general. Web Fest .ME consists of an on-line competition for the best website/web project and a conference that brings together the world’s best-known experts from all areas of the web industry.

For the second year in a row, UX Passion was at Web fest .ME. This year our new Sidekickr TV project (a new, revolutionary way to watch TV and to turn any TV into a Smart TV) was part of the Webup startup competition finals, while our CEO was actively taking part as a moderator in two major sessions: “Foursquare for Development” with Milica Begovic Radojevic from UNDP and for “Secrets of UX Design” with Ryan Freitas, co-founder of About.me.

Also, Wall of Tweets, the world’s best social media wall built and designed by UX Passion was part of the Web fest .ME and Webup experiences allowing attendees to share their experiences on a big screen in real-time, while our new digital signage module allowed organizers to push their information directly to conference attendees making for a seamless, user-friendly and interactive conference experience. 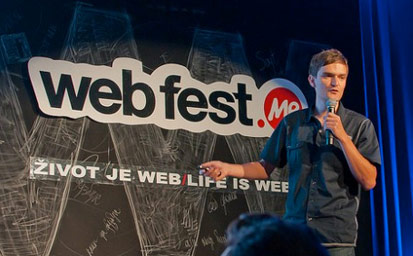