Participatory Design: What is it, and what makes it so great?

Participatory Design (in its origins also called co-operative design) is a relatively new approach to designing products. It successfully involves the stakeholders, designers, researchers and end-users in the design process in order to help ensure that the end product meets the needs of its intended user base.

Participatory Design exercises are used in a variety of fields, such as software and product design, urban design, architecture, graphic design and even medicine.

Up until recently, the majority of consumers believed they were not being designed “for” by the companies they bought their products from, but rather designed “at” and forced to adapt to the ideas and principles that weren’t intuitive to them. In order to fix this, Participatory Design was a creative invention which aimed to actively include the end users into the design process.

It is important to note that, while the users are a valuable source of information and ideas in Participatory Design, they are not allowed to make end decisions and are never empowered with the tools that the experts use. Participatory Design sessions are simple exercises in which we give our users the tools to create and design mockups of software or products they would love to use in the “perfect world” scenario while also asking them to explain why they built their perfect software or a product in that particular way.

From observing their building process and listening to their explanations on why they built something in this or that way, we learn a lot of the things we wouldn’t through a mere interview with the user.

When should you run a Participatory Design session?

At this point, you might be thinking to yourself, “A Participatory Design session sounds great! I want to conduct one, but which tools do I need?”
You will be happy to find that nothing is set in stone when it comes to the tools you should use in Participatory Design sessions.
…Unless you want to provide your participants with stone blocks and rocks, which is totally fine, and sounds like a great idea!

Depending on what you are designing, tools for the session can be anything. If you are working on designing a product or an environment, you might want to use wooden bricks, Legos, plasticine, pieces of rope, maps and so on. Even post-it notes can be used successfully and in a variety of different ways.

One of the great things about Participatory Design exercises is that the only limitation when it comes to the tools used is your imagination.

If you are designing software, you might decide to stick to pen and paper. (Or a whiteboard!) You could create blank versions of different device screens and ask participants to draw out the UI. You could provide the participants with cut out icons and boxes which they could arrange to their liking and according to their needs, explaining why they put something in one place instead of the other.

By letting the participants show us what matters to them, as opposed to telling us, we are getting more specific and more honest data out of the session.

A Participatory Design Session is a great opportunity for designers and researchers to meet and identify with the end-user. The user is invited to enter the creative process and by listening to them, we can avoid making mistakes we are often tempted to make as a result of designing for ourselves instead of designing for the user.

It is important to try and keep the tools used as simplistic as possible. Don’t let the tools you use overshadow the message your participants are trying to get across. Ask a lot of questions, and as with any usability research technique, make sure to spend the most of the session closely observing your participants. 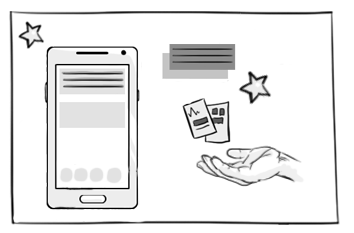