MobX Conference: Touch too Much!

Darko Cengija, our intrepid Chief Information Architect, shares his thoughts on the MobX conference, held in Berlin on 18 November 2011.

Fortunately for our business but unfortunately for trips to conferences, I often cannot know where exactly am I going to be one month ahead. Work on our current projects is intense and a client might need me on-site at any moment, which makes planning my time rather like gambling.

But it seemed to me that mid-November might not be as demanding as usual and I really should attend an event dedicated to the area I spend most of my time working in: design for mobile devices. So, off to Berlin I went for the 2011 MobX conference.

Note to self: if we ever organise a conference with a workshop on one day and the sessions on another, don’t put them in separate venues. The workshop was almost thirty minutes late because more than half of the attendees went to the wrong venue.

The half day workshop I had chosen was Brainstorming and Design Principles, held by Dan Saffer. My only complaint is that it should have lasted at least one day. Dan had so much material to cover; everything was so quick that we only touched the surface. So I can’t say I really learned many new things.

However, there’s another side to every workshop – the people. I did meet some interesting people, including a local who very kindly took us to experience a Berliner Currywurst for lunch after the workshop.

And there I was – half way through the whole thing and it turns out the highlight of my day was lunch. The next day would have to really impress me in order for this whole trip to meet my expectations. And as it turned out the next day, it did.

The conference was held in an old Berlin theatre called Heimathafen Neukölln. We were all sitting around tables, having drinks and enjoying the sessions.
I’m going to point out the ones I enjoyed the most.

Gabriel White, Founder and Principal of Small Surfaces, was talking about how to design compelling experiences that span many devices. They are developing new concepts of how to better connect various devices that we are juggling with every day. The user experience of working with a single device is getting better and better, but the experience of multitasking on a number of different devices simultaneously is still a pain point. Now, image if you could simply make the two devices touch each other and data from one device is transferred into another. No sync issues, no timeout. Just like you pour water from one glass into another. That’s what he was showing us. And these things are the future.

Giles Colborne from cxpartners in the UK was talking about managing attention and distraction in mobile UIs. Well, managing attention at least, because I think distractions are really a part of our daily work. You know, while I was writing this blog post, I received almost a dozen e-mails (I actually read two of them, I must admit), and three of my contacts appeared online on Skype. And that’s just part of the entire story. Technology is distracting us all the time. Giles mentioned an alarming statistic: when the Blackberry Messenger service went offline for three days in October 2011, Dubai police reported a 20% drop in road accidents, while Abu Dhabi police noted a 40% reduction in traffic accidents. Apart from matters of life and death, if only we could isolate ourselves for a few hours, our efficiency in that period would skyrocket. But we cannot be entirely absolved of blame on the inefficiency front. We’re allowing those devices to distract us…

…and that’s where Josh Clark is jumping in with his claim that Mobile Context is a Myth. People today still tend to “clearly” distinguish mobile devices from other computers, but reality is a bit different. We are using our mobile devices much more than we think. “Around 60% of smartphone users admit to carrying their devices to the toilet, and the other 40% are lying”, says Josh Clark. So, imagine if you’re on a train, working on your laptop. Isn’t that laptop a mobile device? What if you’re on your couch just browsing the web on your tablet. Is that a mobile device? Mobile doesn’t mean rushed. Mobile content doesn’t mean less content. Mobile doesn’t mean less complex (and complex is not the same as complicated). And there’s no such thing as mobile web (at least there shouldn’t be).

There was an interesting presentation from Karen McGrane, Managing Partner at Bond Art + Science. It is still hard to convince people in the publishing business not to prepare content for a specific platform, whichever it is, but to mark it with metadata and let the platform recognise and render it.

Last but not least, Oliver Reichenstein announced a completely ppt-free session, which the audience warmly applauded. It was a very interesting story about his journey of becoming an information architect. Basically, it started when he told his working class parents that he wanted to go to college (“back then equal to saying: I’m gay“, says Oliver) to study philosophy (“back then equal to saying: I want a sex change“), and led him finally to Japan.

And where’s the “other side” in this, the people? They’re there, don’t worry. It was a very friendly and open atmosphere. People really want to get to know each other and this is a great way to find out what others are doing in my field – Information Architecture and Interaction Design. Everyone had a story and was willing to share it. And I had my story to share – UX Passion.

In the end, what was the MobX Conference in Berlin? A dozen perspective-changing sessions heard, dozens of new and interesting people met… all in all, a very interesting experience. I hope I’ll be there again next year. 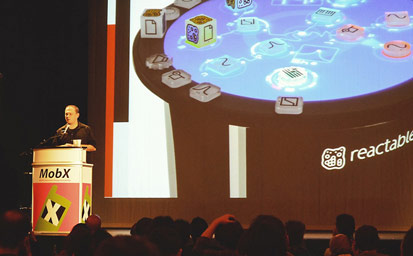