The World Economic Forum’s Annual Meeting is traditionally held in Davos-Klosters, Switzerland. Committed to its main goal of improving the state of the world, the World Economic Forum (WEF) organises a number of conferences around the world, with the Davos Annual Meeting being among the most important events on the calendar for global leaders in politics, finance and economics.

In 2012, the conference tackled global shifts in power and the economic changes we face with the theme “The Great Transformation: Shaping New Models”.

At this point in history, humanity is asking some questions which are fundamental to our future. How can developed countries reduce their debt levels, avoid recession and climb back to growth? How can we achieve sustainable growth without harming human health or the environment? How can emerging economies avoid rampant inflation and stop their economies overheating? How can we best prosper and thrive in a world with more than seven billion people who are connected through information technology on an unprecedented scale?

One answer that underlies all these questions is that fundamental change is needed in the social values we hold, in the way we exploit the planet’s resources and in the way we harness science and technology. We are navigating uncharted territory, and this is why bringing together the brightest minds in diverse fields is of critical importance, as evidenced by the record number of attendees at this year’s Davos meeting.

The meeting gathered over 2,600 heads of states and governments, and business, academic and other leaders in society. The meeting was opened by Angela Merkel, Chancellor of Germany. One of the central events was the BBC World Debate hosted by Nik Gowing, BBC World’s longest-serving presenter.

UX Passion, together with our partners from the World Economic Forum envisioned, designed and delivered an unprecedented social media experience. By building several Wall of Tweets setups and enabling Davos attendees to share their experiences, tweets, images and reflections, we brought the power of social media to this prestigious event. This provided a channel for Davos participants to connect and engage their collective intelligence as never before.

Additionally, for the first time we created a special iPad application to be used during the BBC World Debate. Nik was able to lead the debate and power it with Wall of Tweets for iPad delivering the latest and most interesting questions and commentary straight into his hands.

Also for the first time we implemented our new AlwaysOn! feature that enables Wall of Tweets users to enjoy their experiences without any fears of triggering API rate limits by Twitter, and to be sure that even in case of Twitter hiccups our Wall of Tweets will stay stable and keep running.

A big thanks to our friends and partners at Twitter for providing know-how and support for making this happen. 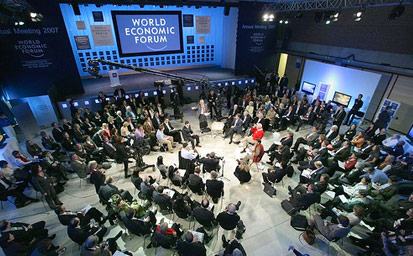